skip to main | skip to sidebar

My BFF from Arizona, Lady Arbonne, thinks I sold my soul to The Sticks when I moved to Kentucky. She makes jokes about the still in our back yard and wonders which days of the week we have electricity. Oh, how she mocks me. But don't hate on Lady Arbonne. Yes, she may be an elitist with her golden, diamond studded cactus in her back yard, but let's be frank. It's not really a back yard, it's a desert. What's more, I know for a fact that lots of people in Arizona wish they had a little Bluegrass from time to time. Why else would they spray paint their graveled front yards green? I'm not making it up. This just proves that no matter where you go bad taste is no respecter of geography.

It's true, I may live in a state once known more for inbreeding than horse breeding, but still, Louisville is a nice place to live. Louisville is smooshed right up against the border of Indiana. This makes Kentucky an even mixture of both Yankee and Confederate cultures. We're a bunch of Conyankates, if you will. Which only means we're confused about whether or not to root for Basketball or Nascar, listen to Chicago or Lynard Skynard, highlight our mullet or tease it with a pick before we apply Aquanet. (Oh, if I had a dollar for every time I walked in to church only to hear, "Hey! The 80s called. They want their bangs back!") But I digress.

Like I said, bad taste is everywhere. It was never more evident than in a recent trip to the grocery store. I’ll have you know that though I have love for most major grocery store chains, my preference typically falls to stores named anything other than Wal-Mart. The smiley face roll-backs are nice, I’ll give them that. Yet the fact still remains: Wal-Mart is where all unrepentant produce goes when it dies. That’s right, Wal-Mart is vegetable hell, and then some.

When I went grocery shopping this weekend I saw some things that literally made me take a second look. And wouldn't you know it, I had my camera with me. So, let's see what Kentucky has to offer in terms of good taste... 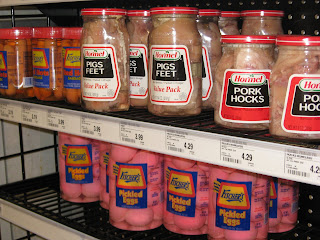 Notice that prices are very reasonable for what I'm sure is cultural delicacy. Also notice that the shelves are partially empty, which means somebody named "Cousin Daddy" is having one screamin' tailgate party right about now. 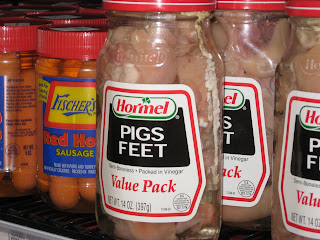 Upon closer inspection it seems that the Pigs Feet Value Pack seems to be oozing. (I think I feel throw up climbing up my throat so let's move on.) 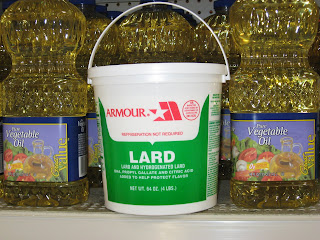 For a mere $4.43 you can purchase 64 oz. of lard. Considering that vegetable oil only yields 48oz. and costs nearly $3 I think its pretty clear where the value lies. To tell the truth I'm not sure if lard has trans fats, but I am positive it has no carbs. Which is nice. If I had a dollar for every time someone asked me, "Stacy, what do you do with lard?" I'd have 75 whole cents in my pocket. Why only 75 cents? I spent the other 25 cents on an unwrapped jaw breaker from a guy selling them out of his pocket for the Lion's Club. (Fuzzy Navel is my favorite flavor to date.) 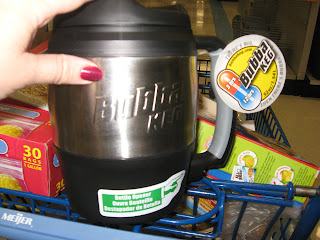 As a general rule I try not to purchase anything named "Bubba". To me it's just poor form. (I appologize to you in advance if your name is Bubba. And I offer my condolences.) The Bubba Keg can be purchased for less than $5. In fantasy land, where unicorns and talking swans have pillow fights in poppy fields, we could pretend that this 52 oz. beauty is for holding beverages like Kool-Aide or even Matamucial. But unfortunately, we all know the Bubba Keg is meant for more sinful beverages: like beer or Satan Water, if you will. Though I'm not an expert on alcohol I happen to know that this keg will hold five whole beers. Let's say this together: "Wow. That's a lot of beer." So that means that with one full Bubba Keg some poor college student is only 52 completely blitzed ounces away from needing this..... 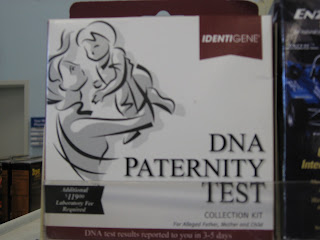 That's right. Sold in my local gorcery store is Armageddon in a Box. For only $13.99 plus tax you have all you need to collect DNA. Send it off with a check for $119 flat and you have iron clad paternity test results. The back of the box is nice, too. It has two full paragraphs explaining why paternity is a good thing to determine. Especially if your chld is ugly. Come on, let's place blame where blame is do.

So there you have it. The best Louisville has to offer, from Pigs Feet to paternity. But I'm not too worried about the demise of my city. I used to live in Indianapolis, where you can find ample signs that read, "1-888-RU-MY-DAD?" I moved to Louisville where we're more refined. At we least keep our indescresion in a box, on the shelf, at the local grocery store, where God intended.

You know you want to say something about this one...
Posted by Stacy from Louisville at 10:55 PM

LOL I'm in San Diego and I can tell ya we have all those items, except for the ham hocks in my local Walmart. Oh, and I get called bubba all the time. I'm somewhat resentful about it seeing I don't have an engine in my front yard as a statue.

No trans fat in lard. Cholesterol, I think? But the best frijoles are made with lard.

Come on Stacy, it's Lynyrd Skynyrd. Your Yankee genes must be dominant. I'll pray for you.

A few years ago, I did a nine month internship in the inner city of New Orleans. I was introdcuced to all sorts of food I didn't know was edible: pig's feet, turkey necks, and my personal favorite, pig's lips.

The pig's lips gave me a nightmare. I kid you not.

You have a good point. My spelling leaves much to be desired. But, isn't poor spelling more of a...how do i put this?...Southern/backwoods stereotype? No matter, the point is I'm nobody's poster child for education.

1.) Could you please reproduce or paraphrase in greater detail the copy from the back of the Paternity Test kit? You seriously piqued my curiosity.

2.) Since having moved to Louisville, have you mastered the proper pronunciation yet? I'd type it out phonetically, but I don't even know how to begin to describe the sound. I think it has about 2.5 syllables and must be said to sound like you have approximately 4 marbles in your mouth. Do you know what I'm talking about?

If you're from Louisville it is pronounced "Luhuvull". Yes, like a mouthfull of marbles.

The back of the box explained that paternity can change your child's life: you can sue the father, get more money, gain economic status, etc. It was almost like it was saying, "Kid, your mom may not know who your dad is but that's not all bad. You could end up with a totally responsible, rich, loving, socially advanced dad. So spit on this stick and keep your fingers crossed. And why not take this box in for show and tell??"

Stacy! I was going to chide you for your ILLEGAL picture taking--that's right, it's against the rules to take pictures in WalMart. Sinner!!--but now I'm far more upset about your mocking of the 1-800-RU-MY-DAD billboards. They provide a valuable service! I mean... how else will you figure out who's to blame for your ugliness if your mom can't remember?

(but, as I put down my stone... how do I know that it's against the rules to take pictures in WalMart? Because WalMart tried to take my camera from me, that's how. They're a grouchy bunch!)

Lady Arbonne here. You have completely proved my point to you. Only blocks from your own house, you can find pigs feet, pickled eggs and pork hocks. I will force myself into an AZ Walmart today and see if we have such wonderful fare. If we do, I might need to move. (Update-I forgot, Wal-mart makes me want to throw skittles at people in a very angry way, so I won't be able to do this research.)

While enjoying making fun of you for your Kentucky living, I have failed to mention that in the recesses of my past, I have family roots in East Texas. If you’ve ever lost your way in Texas, you know what I’m talking about. I can identify (although I don’t like to admit it) to the interesting array of people and culture shock you might experience. In East Texas there are signs on restaurant walls saying 'Don't spit on the floor, get your spit cup at the front.' I wish I were kidding and side hugging the crap out of you, but it's the cotton-pickin' truth.

Love ya, even though you're my trashy friend.

I am more than familiar with the wonderful culture than can exist in East Texas, as both of my parents were born and raised there.

The family reunion every year at Thanksgiving can be quite scary... or entertaining. My sister, cousin and I have created a game over the years to try to figure out who everyone is each year, as the faces are always changing. Then there was the one year that one individual has recently gotten out of jail. Direct quote from my aunt (in a stage whisper, of course): "Watch your purses, girls."
This is exactly why my parents brought us to Dallas to raise. But, if you're nearby for Thanksgiving this year...feel free to drop by!! You never know how weird it will get.

Alison, I think I was at that family reunion. Do you have an Uncle Cecil with a comb over and two missing front teeth?

Lady Arbonne,
Didn't you meet your husband at a family reunion?

I can so sympathize with the trauma involved in seeing pig's feet on display.

You see, I did a blog post a few weeks ago from a Meat & Three that has Pig's Feet on the menu board. You can see the photo here:

Who is this chick?

Stacy from Louisville
I'm a committed follower of Jesus Christ who is "...unable to commit to any messiah who doesn't knock over tables." - Garret Keizer